This is a short video review by dunkoholic. He places the Razor A5 and Fuzion City Glide side by side to give a hands-on comparison.

He gives the Razor A5 (Pink) a spin on it’s front wheel, and proceeds to do the same with the Fuzion City Glide (Yellow).

The Razor A5 wheel is still spinning and the Fuzion City Glide slows down considerably.

This means that the Razor A5 has better bearings on it’s wheels that allows it to glide more.

He asks his daughter to unfold the scooters to the full size and place it against the wall for a full length look comparison.

She does it with ease with the Fuzion Cityglide but has some trouble with the A5.

She abandons her mission and he eventually takes over to do the unfolding while he passes his video camera to her.

A5 feelz a little sloppy but it does have a better bearings than the cityglide. The city glide feels a lot sturdier and runs better… I’d give it a
10 if it had bearings like the a5….” 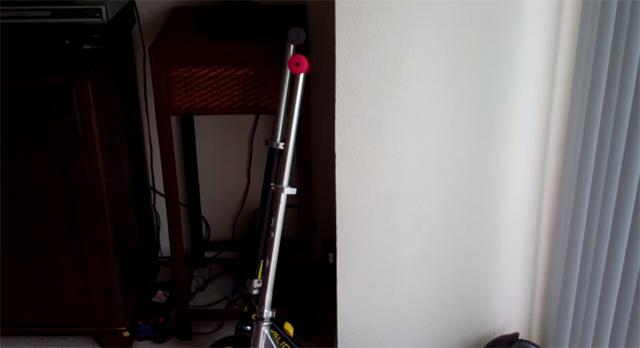 Conclusion:
Fuzion Cityglide has an edge over the Razor A5 in terms of design and folding-ease, but lacks in the speed of the wheels and is more expensive to purchase. Probably a good idea to get the Fuzion Cityglide and add Bones Bearings to get the best of both worlds. Get the Razor A5 Red for convenience if you’re not into changing bearings.

Most Wished For in Kick Scooters from Amazon

Pebble Smartwatch for iPhone and Android

CERTAIN CONTENT THAT APPEARS COMES FROM AMAZON SERVICES LLC. THIS CONTENT IS PROVIDED AS IS AND IS SUBJECT TO CHANGE OR REMOVAL AT ANY TIME. www.adultkickscooters.com is a participant in the Amazon Services LLC Associates Program, an affiliate advertising program designed to provide a means for sites to earn advertising fees by advertising and linking to amazon.com.
Popular Pages + Comparison Charts

Pimp Your Ride III : Get Rid Of Squeaks And Ride Smoother

Pimp Your Ride: Change The Bearings On Your Scooter Wheels

Globber MY TOO Folding Scooter Review